Something that you should know about the Origin of Lion Dance

Lion Dance is a traditional Chinese folk performing arts. Performers in the percussion music, dressed as a lion look, make a lion of various forms of action. Chinese folk traditions, that the lion can be evil spirits. Therefore, every festive festival, such as the new Zhang celebration, spring games, etc., like playing drums, lion dance to help celebrate. Lion dance is also known to follow the Chinese emigrated to the world, Malaysia, Singapore and other places quite popular lion dance. But the Chinese mainland folk lion dance actually has been gradually reduced. Overseas Chinese living in Europe and America also formed a lot of lion dance, the annual Spring Festival or a major festive, they will celebrate the lion dance around the world.
The origin of lion dance is different. Myths and legends is the mountain before the emergence of the lion, eat the villagers within the village, and later the villagers learn martial arts, killing the lion, the villagers to imitate the lion’s shape and become a lion, also a myth version of the Buddha to the lion away, In the often “big Buddha” lead the lion. There are also legendary villagers to paper lion and drums drive away the beast, evolved into a lion dance.
More reliable argument is: China does not have a lion, in Chinese culture, “lion” was originally and “dragon”, “unicorn” as are only mythical animals. When the Han Dynasty, only a few true lions for the first time from the Western Regions of the introduction, when people imitate their outer, action play, to the Three Kingdoms developed into lion dance; Northern and Southern Dynasties with the rise of Buddhism and began to flourish. History books, “the Han Dynasty ritual music” mentioned in the “elephant”, according to the interpretation of the three countries, is to play “fish, shrimp, lion” artist. To the Tang Dynasty, the lion dance is a large-scale performances of the court. At that time, “Taiping” also known as the “Five Lions Dance.” Bai Juyi’s poem describes the lion dance: “Masquerade masked lion, carved wood for the first silk for the tail, gold plated eyes silver teeth, Fen Xun sweater put his ears,” we can see the lion with what we see today Has been very similar.
Today’s lion lion main points of the South lion, North lion two. North lion is the first in the north of the Yangtze River is more popular; and South lion is popular in South China, Southeast Asia and overseas. In recent years, there are also two dancing fusion, mainly with the lions of the South lion, the North lion’s footwork, known as the “Southern Lion Dance”! 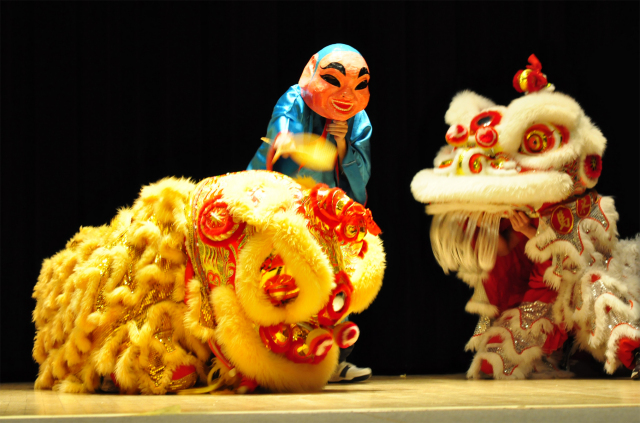