The Lion Dance is an important tradition in China. Normally dance or dance is part of festivities like Chinese New Year, the Moon Festival August, the openings of restaurants and weddings. If done well, it is believed that the lion dance brings luck and happiness. Although lions are not native in China, they came to this country for the famous Silk Road. The rulers of what is today Iran and Afghanistan sent them lions to Chinese emperors as gifts for the right to negotiate with merchants of silk route. The lion dance is prior to the Han Dynasty (205 B.C. to 220 A.D in China) and is during the Tang Dynasty (716-907 A.D.) when in its heyday. It was made particularly during religious festivals. The lion dance was introduced not only in China, but also did in Korea and Taiwan, where lions are not native either. The dances are not exactly the same in these countries, but the symbolism is quite similar.
In addition there are usually two types of Chinese lions Lion North and South Lion. The difference is in the way the lions move, but the biggest difference is in their colorful, the lion of the north has a hairy and yellow Caraa and less movable mouth, the lion of the south has a normally colored body (not both long) hair and a more movable mouth. 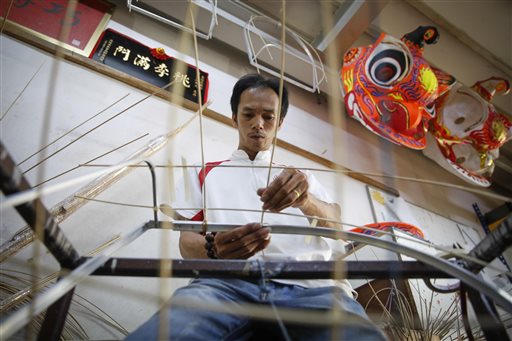 The Lion dance performance is performed by two dancers. One head handles, made of strong but lightweight materials such as paper-mache and bamboo, the other parts, the body and tail of fabric that are attached to the head.

Leon is accompanied by three musicians, playing a large drum, cymbals and a gong also it accompanies a small Buddha, this small Buddha tells the story that is a monk of Shaolin Temple was too rebellious for training the Temple and he was expelled from the Temple. The person who performs it is usually very acrobatic and flexible management has a very good body. The suit carrying a Traditional Kung Fu suit or uniform Monk, sometimes a bright color
Under the suit usually wear something that makes you look fat, usually a cushion or pillow. Also usually wear face covered with a mask, the little Buddha is constantly fastidar the lion with a fan bearing, this character is very acrobatic but very clumsy and constantly falls.
During the dance the head can move lion eyes, mouth and ears for the different expressions of lion, plus dance contains parts such as saluting, walking, eating, climbing an obstacle, special moves, during the execution of all of them You should imitate the lion.

Each type of movement has a specific musical rhythm. Ejecuación being the order of the following, when the lion takes a run moviemiento drum sound or proper rhythm, and both Gong and cymbals, they must follow the drum beat and not the lion.

Dancing quality depends on the level of difficulty, the correct form and positions the enconjunto have a right rhythm. The level of difficulty is governed by the performance of the dancers with high jumps, you put one above the other, etc. Lion dance combines art, history and kung fu moves, so usually those who perform dance are practicing kung fu.
Quite often people who watch the dances think they are seeing dragons. The main difference between Lion dance performance and dragon dance is that the latter is made more than six people